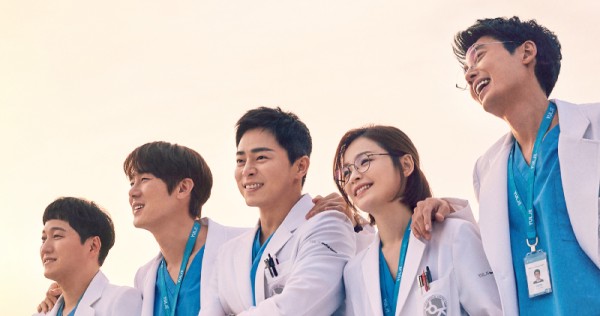 Most of us are counting down the days when Phase 2 (Heightened Alert) ends on June 13, so we can, hopefully, dine out and meet our family and friends without too many worries about the Covid-19 pandemic. But if you still intend to stay at home, some streaming platforms are showing 10 new K-dramas and K-movies this month, including the eagerly awaited Hospital Playlist 2 and The Penthouse 3.

My Roommate is a Gumiho

A gumiho (nine-tailed fox) Shin Woo-yeo (Jang Ki-yong) has been living discreetly in the human world for centuries, waiting for the time when he can become a human permanently. However, his fox bead is accidentally swallowed by Lee Dam (Lee Hye-ri) and they are forced to live together while searching for a solution.

A new romance eventually blossoms between them, but the handsome and wealthy Gye Sun-woo (Bae In-hyuk) also has a crush on Lee Dam, leaving Woo-yeo feeling anxious for the first time in more than 900 years.

Another romantic and unconventional relationship happens between Yang Hye-sun (Kang Han-na) – a gumiho who has been living as a human for five years – and human Do Jae-jin (Kim Do-wan).

Yoon Hae-kang (Tang Jun-sang) is a competitive baseball player forced to move to the countryside, when his father gets a new job as a coach tasked with reviving a badminton team that’s on the brink of extinction. He struggles to adjust to rural life as well as playing badminton.

Hae-kang is joined by a motley crew of other players with distinct characteristics. There’s the youngest team member Lee Yong-tae (Kim Kang-hoon) who talks a lot and is always in front of a computer. Bang Yoon-dam (Son Sang-yeon) is glued to his phone and is also an attention seeker. Then we have Na Woo-chan (Choi Hyun-wook) who is into hip hop and fashion, and is also quite kind-hearted.

In addition to the four boys, there are Han Se-yoon (Lee Jae-in) and Lee Han-sol (Lee Ji-won) who are aces at their girls’ middle school. Rounding out the players are coaches Yoon Hyeon-jong (Kim Sang-kyung) and Ra Yeong-ja (Oh Na-ra) who were star badminton players themselves.

The first episode premiered on May 31 on Netflix, with new episodes released every Monday and Tuesday.

This movie takes a realistic look at the romance between Jang Hyeok (Jang Ki-yong) and Da-eun (Chae Soo-bin), which starts out sweet and loving, but gets worn down by demands at work and leads to exhaustion.

When a bold and charming colleague Bo-yeong (Soo-jung) takes a liking to Jang Hyeok, he’s caught between the two women.

The movie premiered on June 4 on Netflix.

The third season of the popular medodrama is finally here! Three mums in this drama unveil their secret desires to elevate their lives. Shim Su-ryeon (Lee Ji-ah) will do anything to take revenge on the adults that wrecked her child’s life. Cheon Seo-jin (Kim So-yeon) may have cultivated a successful career as a classical singer, but her daughter seems to lack in so many things unlike her.

Oh Yoon-hee (Eugene) refuses to have her daughter inherit poverty and devastation and tries everything she can to move into the Penthouse. This is a journey of the three mums pedaling down an unstoppable race fuelled by greed and desire.

Premiered on June 5 on Viu with new episodes released every Saturday.

At a Distance, Spring is Green

Based on the webtoon Blue Spring From a Distance, watch this coming-of-age story about the ups and downs of a group of college students trying to figure out life and friendships.

Bubbly freshman Yeo Joon (Park Ji-hoon) hides his scars behind his smile. Though born in a wealthy family, he grew up in the shadow of his older brother and is starved for affection. While doing a group project, he hero-worships Nam Soo-hyun (Lee Shin-young), the infamously blunt and bad-tempered straight-A student.

Tune in to watch the cute bromance as Yeo Joon follows Soo-hyun around like an eager puppy.

From June 14 on iQiyi, with new episodes released every Monday and Tuesday.

Na Young-won is the editor of Monthly House magazine. Even though she has worked for 10 years, she still does not have a place to call her own and lives in a monthly rental house.

To her, a home is her personal haven, so even a rental house needs to be decorated to reflect her personality.

Things change when Yoo Ja-sung (Kim Ji-seok), the new landlord and the CEO of Monthly House, appears. To him, real estate is merely a way to increase his assets and a place to rest. Having grown up in a harsh environment, he believes the only way to get rich is to invest in real estate. That is till Young-won appears in his life.

From June 16 on iQiyi with new episodes released every Wednesday and Thursday.

This drama series with its warm stories about everyday life centres around five doctors who have been friends since medical school and are now working at the same hospital.

While they all have their different specialties and personalities, they mesh perfectly as well-seasoned friends. There’s hepatologist Lee Ik-jun (Cho Jung-seok) who is goofy, caring, and absolutely adores his son. Paediatrician Ahn Jeong-won (Yoo Yeon-seok) is self-sacrificial and doesn’t care for materialistic things. Cardiothoracic surgeon Kim Jun-wan (Jung Kyung-ho) appears gruff but is soft on the inside with quite a sweet tooth.

Neurosurgeon Chae Song-hwa (Jeon Mi-do) is a huge fan of camping and excels at everything except for singing. Lastly, obstetrician-gynecologist Yang Seok-hyeong (Kim Dae-myeung) enjoys his alone time and dotes on his mother.

From June 17 on Netflix with new episodes every Thursday.

ALSO READ: Adults only — What to watch this June on your favourite streaming platforms

So Not Worth It

This Netflix Original series introduces eight university students and their individual quirks. Resident advisor Se-wan (Park Se-wan), who is also an assistant teacher, is thrifty and tough as nails having gone through hard-knocks in her life. Jamie (Shin Hyeon-seung) is a new student receiving lots of love for his handsome looks. His puppy-dog eyes will melt your heart.

Then there’s the youngest of the bunch, Sam (Choi Young-jae), who is all talk and full of mischief. Even though he’s always bluffing, you can’t help but find him endearing. Minnie (Minnie) is the fashionista of the group and a huge K-drama fan. She can even pull off the North Korean dialect after watching Crash Landing on You. Frequently mistaken for being a foreigner, Hyun-min (Han Hyun-min) pretends to be an international student in order to live at the international dormitory with his friends.

Hans (Joakim Sorensen) is a stickler for rules who is strict with others but quite flexible with himself. Terris (Terris Brown) is a show-off and a Casanova. Finally, there’s Carson (Carson Allen) who acts like a grouchy old fart.

The diverse students find themselves in a variety of ridiculous situations as they navigate university life in Korea. Even when everything feels so not worth it, they live each day to the fullest and enjoy plenty of laughs in the process.

From June 18 on Netflix.

He thinks relationships are a bother but wants to flirt, while she doesn’t believe in love but still wants a relationship. Can they both get what they want?

From June 20 on Netflix.

ALSO READ: Ellie Kemper apologises for participating in controversial pageant as a teenager

In K-drama review: Dark Hole, many K-dramas are guilty of being overindulgent in their painstaking efforts to tie off each story thread that has survived until their finales. Moreover, leaving no stone unturned. Not so in the case of Dark Hole , the sci-fi horror show from OCN starring Kim Ok-vin and Lee Joon-hyuk, which...

Kim Kardashian West shares a new family portrait – without her estranged husband Kanye West. The Keeping Up with the Kardashians star posted the professional black and white photograph from her shoot with her four kids on Instagram. Kim can be seen cradling son Psalm, who was born in May 2019, as a newborn, with...