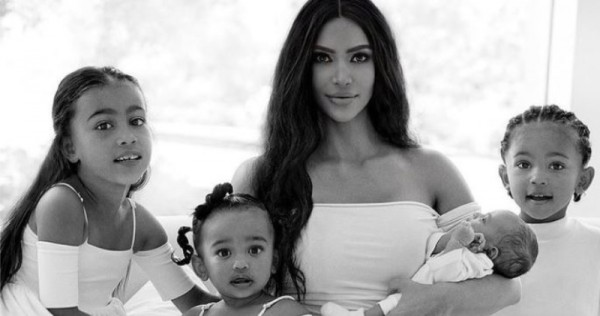 The Keeping Up with the Kardashians star posted the professional black and white photograph from her shoot with her four kids on Instagram.

Kim can be seen cradling son Psalm, who was born in May 2019, as a newborn, with North, seven, and Chicago, three, to her left, and Saint, five, to her right.

Although they are divorcing, Kim and the Heartless rapper are still said to be “getting along” with each other.

The 40-year-old reality star filed for divorce from the 43-year-old hip-hop veteran in February after almost seven years together, but the pair have remained on good terms for the sake of their brood.

And sources recently insisted Kim is “very happy” to have been able to “keep things calm” with Kanye.

One insider explained: “Kim and Kanye are getting along. They have both stayed true to their commitment to make the best situation for the kids.

“Kim is very happy that they have managed to keep things calm. She thinks Kanye is a good dad. She wants him to be able to spend as much time with the kids as he wants.”

During a recent episode of the family’s E! series, Kim broke down in tears and admitted she feels like a “failure” while opening up about their split.

In a clip filmed last year, the Skims founder hinted that the reason for divorcing the ‘Famous’ rapper was because he “deserves” a wife who can travel from state to state with him.

Speaking to her sisters, she said: “I honestly can’t do this anymore.

“Why am I still in this, like, place where I’m stuck for years? Like, he goes and moves to a different state, every year, I have to be together so I can raise the kids, you know? And he’s an amazing dad, he’s done an amazing job.”

Kim also admitted she feels like a “failure” and a “loser” because this marks her third divorce after previous marriages to Damon Thomas and Kris Humphries.

Most of us are counting down the days when Phase 2 (Heightened Alert) ends on June 13, so we can, hopefully, dine out and meet our family and friends without too many worries about the Covid-19 pandemic. But if you still intend to stay at home, some streaming platforms are showing 10 new K-dramas and K-movies this...

Ellie Kemper apologises for participating in controversial pageant as a teenager

Ellie Kemper apologises for her participation in a controversial pageant when she was a teenager. The Unbreakable Kimmy Schmidt star was recently the subject of a backlash. It happened when a newspaper article about her coronation as the 1999 Queen of Love and Beauty at the Veiled Prophet Ball in St. Louis, Missouri, resurfaced because...